Flow Musique > Artistas  > Someone Else 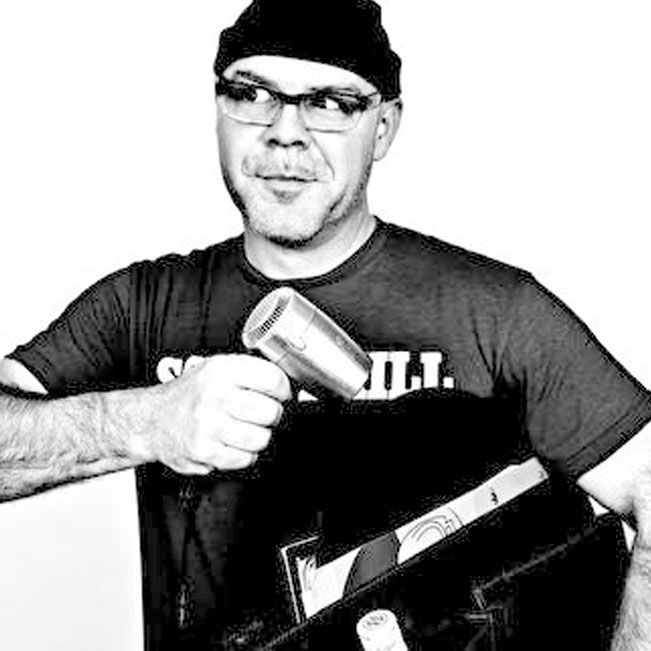 Someone else is philadelphia’s Sean O’neal, whose musical inspiration is already imbedded in his roots. his grandfather was a high school music teacher and also played bass with bill hailey and the comets. his father was also on the brink of success with various rock bands throughout the ’50s and ’60s. during his early youth, sean lived a cheeseball life performing in a variety of choirs and musical plays. also around this time, he would often sit with his father and grandfather watching and listening to spike jones — a comical bandleader from the ’40s and ’50s who would often make music by hitting random objects in the room. by his teenage years, sean was playing guitar and synthesizers in a variety of indie rock bands while being a huge fan of shoegazer rock and krautrock.

Since 1994, he has been the force behind his ever-evolving, kitsch-driven electro-pop outfit, flowchart (much of it alongside erin anderson a.k.a. fidget) — releasing dozens and dozens of albums, singles, eps and comp tracks on different labels from all over the world (like darla, morr music, instinct, endorphin, carrot top, and his own fuzzy box imprint), and flowchart was chosen as one of the «next 100» according to urb magazine in 1998. around this time he also was hooked on idm, techno and house, and he had already fallen in love with artists such as the orb, plastikman, king tubby and matthew herbert. he became intrigued by herbert’s use of field recordings and found sounds, and this recalled a similar feeling to what he gained from the music of spike jones.

As his love for minimal techno solidified by 1998, sean teamed up with jay haze and bjoern hartmann, and together they launched the tuning spork label. while making dance music with field recordings became more and more his shtick, sean grew close to kate iwanowicz (a.k.a. miskate) and sylvain takerkart (a.k.a. fusiphorm), and together they launched the foundsound and unfoundsound record labels. to this day, both labels continue to gain increasingly more recognition while offering a unique facet to the modern-day minimal scene.

Throughout the years, sean also co-produced events in philadelphia and new york — hosting performances by magda, matthew dear, sammy dee, geoff white, jeff milligan, dan bell, dinky and many others. he also spent a lot of time writing part-time as a journalist for various music magazines and newspapers such as xlr8r and philadelphia city paper.

Over recent years, sean’s production skills have been garnering respect among internationally renowned djs and labels alike, as reflected by his massive discography of releases and remixes for labels like musik krause, tuning spork, foundsound, mo’s ferry, microcosm, nummer, kickboxer, sender, alphahouse, roman-photo, level non-zero, mule musiq, hello? repeat, revolver and many others. this was accompanied by extensive world touring, and he was voted as one of the best live acts of 2006 in groove magazine. sean continues to spin and play live all around north america, south america, europe, japan, russia and elsewhere — including fabric in london, yellow in tokyo, rex club in paris and panorama bar in berlin.

He is also the recent co-founder of the little helpers label alongside andrew rasse (a.k.a. butane).