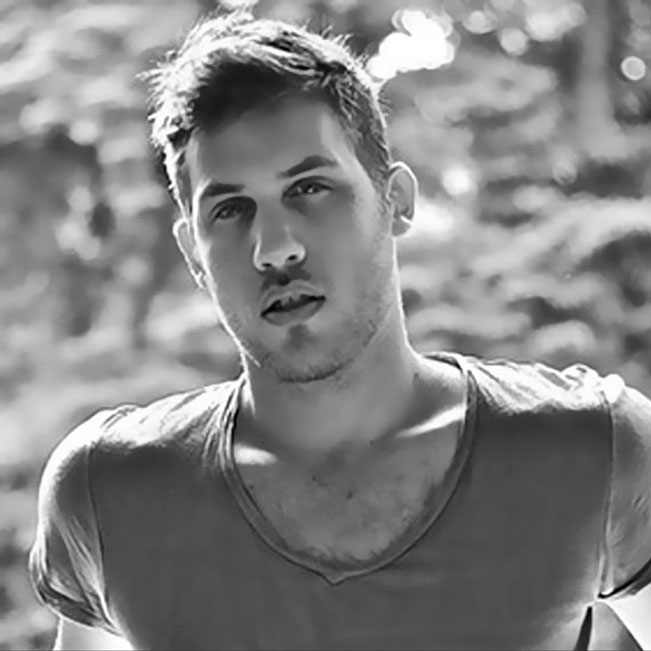 Dante Costantini has been involved in various forms of music production since he began
playing records in a local FM station at the age of 17 and from then onwards he never look
back. Constantly traveling across the country where he is from (Argentina) playing gigs in
clubs and bars.

In the year 2006 he tour throughout Mexico and stayed there for one year. By the time of his
return to Argentina in 2007, Santos already had release his first 12″ in the German label
Gluckskind Schallplatten, which open doors for him to explore new lands.
In 2008 Santos Resiak traveled to Europe for the first time to tour the old continent and made
Berlin his home for the past 6 years. During that period he discovered new ways of engaging
with the profession he loves, and while his reputation as an up and coming young artist grew,
the acquired experience lead him to play at prestigious clubs and festivals such as Fabric
(London), Fusion Festival (Germany) , Time Warp (Argentina edition), OFF Sonar events
(Barcelona) ADE in Amsterdam , Bar 25 (Berlin) and Sullivan ‘s Room and The Bunker in
New York , while having regular appearances at AM Local and Rioma in Mexico City.
Since then, he had several releases on labels such as Gluckskind Schallplatten, Immigrant
Records, Soweso, One Records, Deep Series,, Supernature and other various remixes
contributions and compilations appearances in labels such as Flumo Recordings, Apparel
Music, Leftroom, and Mothership. In addition to single releases, Santos has been involved in
projects such as Human Interaction (Berlin based live jam session which include another 5
members) and a duet call «Barrio Weedwagon»
The 2010 release of his track «Saully» on Lauhaus Soweso records, is to this date one of his
most memorable tunes and gave him widespread exposure on the international press, and
made him an on demand producer and remixer. In the following years remixes like the one for
Sarp Yilmaz «My Baby Got To Go» on Apparel Music and T.W.I.C.És «Time To Freak» on
Flumo Recordings, have shown that Santos has a distinctive taste on music and a keen sense
of re inventing his sound project after project.
His latest single «A Better Light» has had a great impact on his career after being one of the
most played tunes in Ibiza during 2013 and quickly gained support from some of figureheads
of the industry, including Robert Owens, Dixon, Dubfire, Bill Patrick and Sasha to name but a
few.
This is his first single out on Subb-an & Adam Shelton rapidly growing One Records, and his
first collaboration with Buenos Aires vocalist and producer Dilo.
One of his biggest motivations are collaborations. Early 2010 Santos team up with acclaimed
British artist Subb-an, and the aftermath was their first and only track together called «Yo
Amigee» released on Mothership. Mainly beats and bass is the signature of this collaboration,
an positive one considering the broad musicality these fine artist have.

in 2011 with artist and friend Ekkohaus they released a recording material which took two
years in the making. The 3 track ep was released on Deep Series and is one of the «richest in
musical content to date » the three tracks fuse together the artists still unbroken enthusiasm for
deep sounds in one melodic common denominator. «Thanks But No» is a homage to the
saxophone (played live by Robert Wuerz). Heavy with groovy loops the track creates a free
floating ambience reminiscent of a Jazz Club in New Orleans or a night club on an early
morning in Berlin.
For the past few years, Dante has been recording and compiling more than enough material to
began working on his debut album . This project is perhaps his most ambitious one,
considering the amount of time the artist is taking to finish it. The album will feature
collaborations from artist from different countries with which has been working over the past
years. A lot of the material are only extracts from fleeting jam sessions in remote studios in
Berlin, Oslo, Barcelona, and Rosario.
When it comes to live performances, Santos Resiak is one of a kind. Having a «keep it raw»
attitude, meaning open and exposed to improvised, therefore mistakes are always welcome.
His intention on the floor are rather simple.. keep the groove going and make the flow never
ends. Powerful, deep, groovy, eclectic and edgy are only few ways to describe his unique
attitude. Santos is always striving to forward his sound with each new experience garnered –
setting high his own benchmarks, who knows what the future will hold.